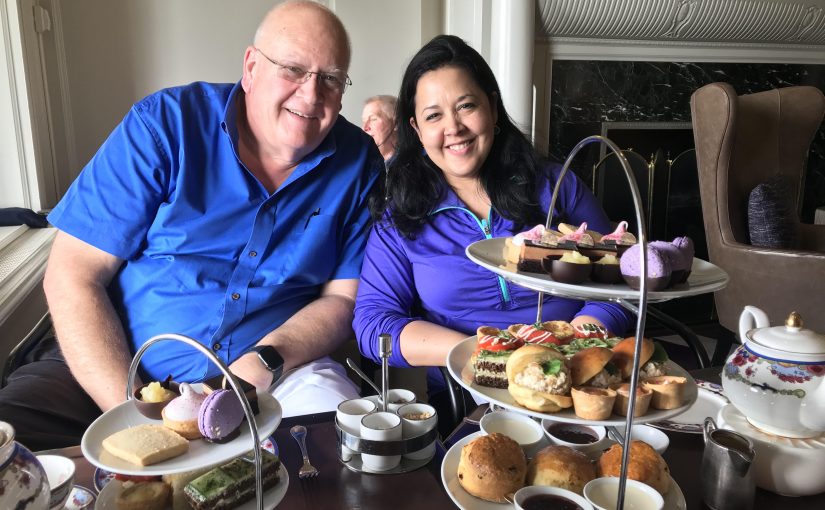 For the most part, unless my gut is telling me to slowly back away, my answer is a resounding yes! The results of these interactions can impact you for a moment, for a lifetime or somewhere in between, but almost always there is a positive result that ensues.

On a recent speaking engagement in West Virginia, some delayed flights and free time provided me with ample opportunity to create connections with some interesting folks:

Norm the paediatrician explained about the measles epidemic and his passion for preventing childhood accidents – did you know that accidents are the # 1 cause of childhood deaths?

Dave the retired park ranger invited me out on a group hike in the hills of West Virginia to explore flora, birds, trees and wildflowers. I learned a lot and sure beat sitting in my hotel room all alone.

Kristen the new owner of a cryotherapy clinic, because I looked in the window and she waved to me, we ended up doing a FB live video interview while I tried it out, brrrr! I loved that she had a wall of adventure in her business where clients put up adventurous things that they did. You can see the video here.

Tracy the pediatric dentist who was on her way to a family camping trip to Utah, she said it’s amazing there, now I want to check it out! She is also on the board of a foundation and is now interested in hiring me.

Ramona a 79-year-old spit-fire and former politician who still works full time because they won’t let her quit – she’s that good. She looks amazing, acts like a young woman and has a smile that doesn’t quit, I want to be like her!

Charles a business owner who makes my travel schedule look like a vacation. He racks up hundreds of thousands of miles per year. He talked to me about offsetting carbon emissions – even for all the flying, he does he said it cost just around $200 to offset his emissions. I will check it out for myself, it would feel good to give back to the planet.

Oscar and Carmen a loving couple from Columbia who gave me Spanish lessons on the leg of my flight from Chicago to Vancouver.

I forgot her name – but she is a psychologist from Alaska, who just bought acreage in West Virginia to make her husband’s retirement dreams come true.

Veronika was guided to her seat beside me on a flight, she was on route for training to meet her new guide dog. She is a multiple transplant recipient, trains in martial arts and oozed positivity. She was unwell on the plane and I was thankful that I was there to help her.

And finally, there was Stewart the fire safety specialist who was on his way to the TED Conference in Vancouver. He is a philanthropist, started his own foundation that trains first responders for free and told the love story of him and his wife. She worked for him and quit her job so that they could date and then he didn’t call her for a year! Stewart is an emerging speaker who I was able to introduce to his local Speaker’s Association chapter in Illinois. Stewart told me the jaw-dropping story of a bold move that he made…

He was speaking for a group of leaders and everyone was sitting in the back of the theatre, he asked them to move up and no one did so he said, “I thought I was here to speak with leaders and since there aren’t any in the room, I’m leaving.” And he left!! Can you imagine those leaders sitting dumbfounded at the back of the room? I bet they learned more from him leaving than if he had stayed – so gutsy!! You can watch his TEDx talk here.

His assistant Celina was with him, she moved to the USA from Nicaragua all by herself when she was just 7 to live with her grandmother whom she had never met. Wow.

Celina and Stewart ended up flying over to the island for 4 hours to hang out with the Hub and I and it was delightful, now we have new friends in Chicago!