We had a fun family conversation about ‘Spirit Animals’; which animal you feel like you are most like and why.

It was a fun, interesting and enlightening conversation. It was interesting to see which animal people connected themselves with and which animal other people selected for you. You may want to try it around your kitchen or board room table!

The Hub had a hard time coming up with an animal for himself until recently, long after the original conversation, he declared, “I finally figured out my Spirit Animal, it’s a sloth!” 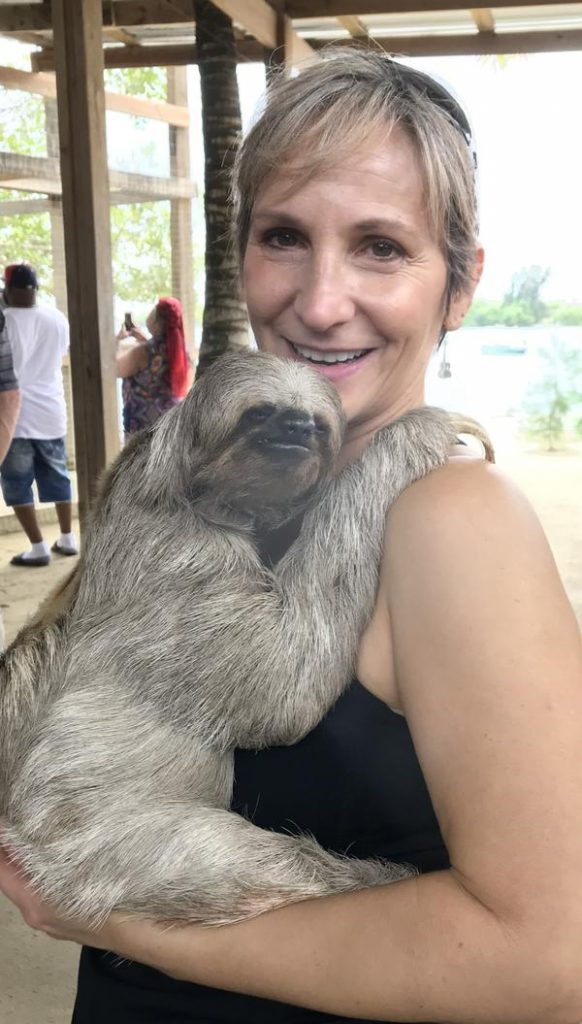 A sloth? A sloth? A sloth! The one they make fun of in Zootopia? My first thought was, OMG, why would anyone admit to being like a sloth – a slow, lazy, get nothing done sloth? Me, I’m more like a monkey, darting here and there, checking everything out, often looking silly while generally having a good time.

Silly as this may sound, it really bothered me that he connected with the sloth, I had liked the Emperor Penguin that our son had declared for him because he was protective of his family. I even preferred the ‘loaf of bread’ that my Italian mom always compared him to…”He’s as good as a loaf of bread.” She says whenever she talks about him – apparently, this is a common expression in Italian and sounds much better in that language.

Anyway, back to the sloth, er, The Hub, he liked what the sloth represented as he plays with his early retirement; relaxed, easy, not worried about time or days, not in a rush to get anywhere.

After this convo, I started seeing sloth items everywhere; clocks, stuffed animals, shirts, it seems people were really embracing sloths for some reason. And then something crazy happened while on a trip to Guatemala with my daughter, we had the rare opportunity to visit a sloth and monkey sanctuary.

Before we entered the monkey area, we had to remove everything that wasn’t attached to us, and even jewellery that was. The monkeys were fast, into everything and very entertaining. And then there were the beloved sloths. Quiet, peaceful and not in a hurry to get anywhere. They looked so content, the look on their faces, sort of a half-smile, like there was nowhere else in the world they would rather be. And there they were, together, the sloths and the monkeys – each doing their own things in their own way, each happy, and all living together in harmony.

And so I am trying to learn to embrace the sloth, the characteristics that make him who he is, after all I did not marry a monkey and I should know by now (30+ years) that I’m not going to turn him into one and probably at the end of the day I couldn’t be as monkey-like as I am without him being as sloth-like as he is.

Is this e-news making any sense at all? What I am trying to say is, what if we stopped trying to change other people to be what we want them to be? What if we focused on the benefits of the characteristics that they have and figure out ways we can use our gifts to compliment each other?

Embracing your sloth (or whatever other animals you have around you), it’s just one more way to live Your Life, Unlimited.

P.S.-Full Disclosure…I asked my sloth what he thought about me sharing this article if he wanted me to change anything or not share it and he said, “It’s Perfect!”