So I’m on my way out of town to a three hour workshop for Administrative Assistant’s Week and I am their ‘gift’! En route, I decide to give The Hub a call to say hi.

He tells me to please be careful driving in this city because a few weeks ago when I was there a photo-radar snapped my pic for going over the speed limit in a school zone and a ticket had just arrived in the mail. I was a bit upset because I know those tickets are really costly but what he said next really put me over the edge.

“Actually, you got two tickets on the same street within three minutes of each other.”

He said this so matter-of-factly, not a hint of upset in his voice. I took that as good news, maybe the tickets were for small amounts. I asked him how much I owed.

“Over five hundred dollars.” he said.

Over five hundred dollars! That’s like a plane ticket, oh my gosh, I was so upset, I was so mad! First I was mad at myself. And then…I was mad at him!

“I’m on my way to make people happy,” I said through my tears, “why would you tell me something like this now?”

“Well, I was upset when I found out too, but I changed my mood, so just wave your little positive wand and change your mood too.”

Blah, blah, blah. I didn’t want to hear this! Don’t you hate when people throw back your own advice in your face? Grrrr. 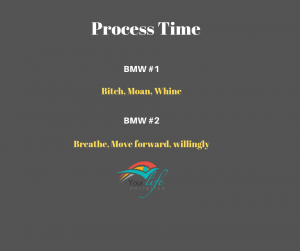 BMW #2 – Pause, breathe, regroup, re-frame. I can afford to pay those tickets. Nothing will really change in my life. We won’t have to go without because of them. No one was injured because I was speeding, no harm was done. I did the crime, I have to pay the fine and there is no one else to blame but myself. Suck it up princess.

As it turns out, the best thing about being a speaker is even bad incidents can turn into a story and learning opportunity for myself and others. The Admins could so relate and got a kick out of it when we were discussing ‘attitude’ in our workshop. This story just happened to cost me five hundred plus dollars.

Also, The Hub and I have agreed to not deliver bad news to each other when it could adversely affect what the person has going on next, it may seem like common sense but apparently it took us 30+ years to figure it out!

Giving a reasonable space of time between the negative incident and the positive wand, aka BMW #1 & BMW #2, it’s just one more way to live Your Life, Unlimited.

PS – I did write a letter, admitting guilt and asking for a reduced fine since it was on the same street within three minutes. It’s worth a shot!