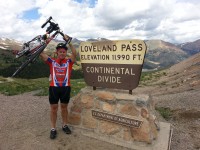 Mike Malyk, has lost over 100 lbs and just finished his first Boston Marathon. Tracy Garbutt is blind but didn’t let that obstacle come in between him and his life-long dream. Joe Tasse has had 2 hip replacements – just a minor obstacle to completing the Triple By-Pass Road Race through The Rockies.

If you think you have a barrier to what you want to accomplish, take some inspiration from this guys, listen in to this week’s Your Life, Unlimited radio show and enjoy Joe’s guest blog post on how you can use Emotional Intelligence to amplify your already great life!

You can listen to the entire Your Life, Unlimited radio show here and enjoy Joe’s guest blog post on Emotional Intelligence below…

What is EI?  A quick overview and why it’s important to everyday life.

EI – ability to be aware of, control and express one’s emotions and to handle interpersonal relationships judiciously and empathically; to be able to understand, interpret and respond to the emotions of others

The subset of social intelligence that involves the ability to monitor one’s own and others’ feelings and emotions, to discriminate among them and to use this information to guide one’s own thinking and actions

•Accurate self-assessment   emotions of others

•Self regard ^ Organizational Awareness

•Do we really know who we are?

•Self regulation ^ Developing Others

How do our brains get in the way of EI?  I thought our brains were supposed to help us?

Limbic System (Latin limbus — border or edge) – believed to be older than other parts of the forebrain and developed to manage the “fight or flight circuitry” necessary for survival of reptiles and mammals, (ever had a rode rage experience?)

How can we improve our EI?

1.Quit treating your feelings as good or bad. ^ Be aware of body language

2.Seek to understand who or what pushes your buttons. ^ Live in the moment

3.Explore why you do the things you do. ^ Practice listening

4.Seek feedback from others. ^ Practicing sensing the    mood in the room

3.Challenge your self-talk – our thinking drives our behavior.

6. Acknowledge the other person’s feelings

How Can We Maintain Resonance in Our Leadership, In Our Lives?

Dissonance has several meanings, all related to conflict or incongruity

As leaders or just as individuals, what are some essential components of personal renewal in our lives?  How do mindfulness, compassion and hope allow us to pursue personal renewal?  We are all leaders in some way.

How are they important to combating stress that is cumulative in our lives?

From:  Resonant Leadership, Renewing Yourself and Connecting With Others Through Mindfulness, Hope and Compassion, Richard Boyatzis and Annie McKee, Harvard Business School Press, Boston, MA, 2005

The Sacrifice Syndrome:  The Neuropsychology of Power Stress and Renewal

(from Boyatzis and McKee)

Leadership requires the exercise of influence or power – having an impact on others, making things happen and taking responsibility for the organization.

Emotions are contagious . . . and can lead to organizational dissonance

Leadership effectiveness requires the regular exercise of self-control, placing the good of the organization above personnel impulses and needs, which is stressful.

^ Other RPFC exciters:  fear, disgust, depression, unpleasant engagement    with the environment, adrenalin always pumping, always in a       physiological state of high alert, action-oriented all the time

^ Stress = overactivation of the sympathetic nervous system (SNS),       allowing us to act quickly in the short run, fight or flight . . . but the parasympathetic        nervous system (PSNS) is suppressed, responsible for recovery and keeping us at basal    levels at rest, i.e., releasing hormones that lower blood pressure and strengthen the     immune system, slows breathing, induces calm

^  Enables us to believe that our vision of the future is attainable, and to move           toward our goals while inspiring others to reach their dreams as well

^  We need to have dreams and aspirations, be optimistic, and see the desired          future as attainable

^ Starts with self-awareness; trying to see yourself as others see you

^ Living in the state of full, conscious awareness of one’s whole self, other people       and the context in which we live and work

^  Social networks = decrease mortality rates in humans; in primates, nurturing          bonds between parents and offspring increases the length of survival of the parent for      both males and females; cardiac patients with pets to care for live longer, due to      decreased activation of the SNS.

You may be in the zone of the “sacrifice syndrome” if you feel:

Or if you’ve noticed changes in yourself or your relationships such as:

Joseph M. Tasse, FACHE (Fellow of the American College of Healthcare Executives) can be contacted at 586-255-1070.