Learning more about other people makes us more compassionate human beings, less judgemental, more likely to help, and quite possibly nicer in general.  So when I had the opportunity to participate in The United Way’s Living on the Edge program, an experiential workshop to help people get a feel for what it’s like to live in poverty.

On today’s Corus Entertainment radio show, Heather Block Director of Strategic Initiatives at the United Way talks about the benefits of the poverty simulation program – (which I highly recommend for teams).  If you have questions they can contact them directly at lote@unitedwaywinnipeg.mb.ca.

Also on this week’s show, Martin Parnell – a running inspiration! Setting 4 Guinness Book records and having raised over $600, 000 for Right to Play  – Martin ran 250 full marathons in one year and chronicles it in his inspiring book, Marathon Quest. He shares with us some of his key insights in our time together.

Listen in to the podcast here: Your Life, Unlimited with Stephanie Staples and Martin Parnell 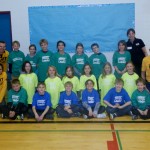 Over the last fourteen years the humanitarian organization Right To Play has developed play-based, educational programs, helping over one million disadvantaged children in 20 countries. A key component is the training of Junior Leaders. These are boys and girls aged 8 to 16 and to date there are over 9,000 Junior Leaders worldwide.

I first saw Junior Leaders in action in 2011, when I visited five schools in Benin, West Africa. As an Honorary Athlete Ambassador for Right To Play I traveled with two other Athlete Ambassadors, Caroline Ouellette, four-time hockey gold medalist and Heather Moyse, two-time bobsleigh gold medalist. At Dogoudo School, Junior Leaders taught us a relay game aimed at promoting team work and at the Vedoko School for the deaf, we participated in a dodge ball game learning about protecting ourselves and each other.

Now, for the first time, Right To Play is training Junior Leaders across Canada. This program is being rolled out at 150 schools across the country and on Tuesday April 15th and Wednesday April 16th 2014, my wife Sue and I attended the “Play Academy” at Elizabeth Barrett School in Cochrane. The objective of these sessions is to develop a group of Junior Leaders and have them teach Right To Play games back at their schools. This is all leading up to a national “Today We Play” day on May 8th. This will be Canada’s biggest celebration of play, promoting children’s rights, led by Junior Leaders.

The “Play Academy” was led by Jaye and Colin from Right To Play. They are both teachers and had spent the past three weeks travelling the country conducting “Play Academies”. At 9.00am students started to roll in. They were from five schools in Cochrane and area, Elizabeth Barrett, Holy Spirit, Westbrook, St. Timothy, Glenbow Elementary and Ecole Notre Dame Des Valles, with grades ranging from 3 to 10.

The change in the students, over the three hour academy, was incredible. Jaye and Colin soon had them playing games and interacting. After some introductory activities, the students were put into groups, mixing the schools and grades. They then were given games to learn and teach such as “Hungry Spiders”, which demonstrates children’s rights to security and safe shelter, and “Protector Dodgeball”, in which they focus on how to protect themselves and others. The students had to teach the rules of their allotted game and its objectives, demonstrate how it is played, set perimeters, organize the other students and answer questions.

Sue and I monitored and participated in the games, making sure all students were actively involved and defining their roles for the presentations. It was amazing to see them grow in confidence. We watched as a child in Grade 3and one of the smallest in the session, at first held back, but once she was in a group and saw that the others would listen to her she came into her own. Standing in front of all the students she explained the game, and its key objectives. Definitely one of Right To Play’s first Canadian Junior Leaders in the making.

Thanks Martin – your mission is inspiring on so many levels!

Now we need to ask ourselves, how to prepare for our marathon of life.

Stephanie Staples, CSP* is the author of When Enlightening Strikes – Creating a Mindset for Uncommon Success and an internationally acclaimed motivational speaker. She empowers audiences & clients across North America to bring their ‘A’ game to work and to life. Stephanie has a special interest in working with and empowering nurses and healthcare providers. She happily calls Winnipeg, Manitoba, Canada home. You can get loads of complimentary resources to help with issues such as work/life balance, wellness, stress management and happiness in general, as well as find out more information about her coaching and speaking services at http://www.YourLifeUnlimited.ca.