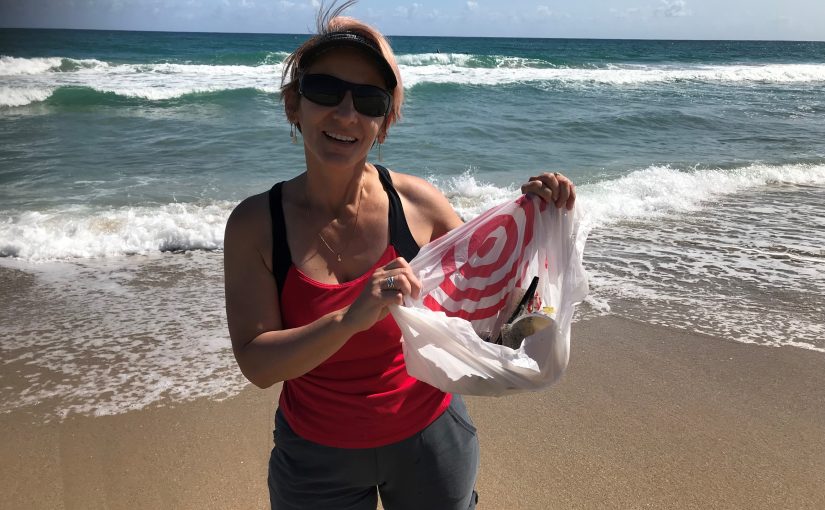 I’ve got a thing for…garbage. Yes garbage, it may sound a little odd but it drives me crazy nature is infected with litter as it was recently on a potentially beautiful beach in Florida.

All our senses were being stimulated – fresh air filling up our lungs, waves crashing, salt water dusting our lips and boo…litter on the beach.

Some of it was undoubtedly left behind by thoughtless beach goers, but much I suspect washed ashore. I don’t how it got into the ocean in the first place before it was washed ashore, but there it was. Hundreds, (I guess thousands if we would have kept on walking) of pieces of industrial-type plastic, bottle caps, pen lids and the like.

We sort of tsk, tsk’d at the disturbing site as we strolled along the uncrowded beach until we saw an older woman in a bathing suit, her arms loaded with garbage, coming towards us.

She stopped in front of us and motioned to her garbage and then she spoke. She implored us to pick up one piece of plastic. “If everyone just picked up one piece.” she said.

Of course we couldn’t not pick up garbage now, she was so impassioned. We didn’t have a bag but we found a container and filled it up. Soon we saw other people coming towards us with bags and in a very ‘trick or treat’ style they opened them up so that we could deposit our ‘treasures’.

The next day and every day thereafter we brought our own bags to the beach to collect. Sharing knowing glances with the fellow ‘collectors’ it was special to see a little kinship – united by a cause to leave these beautiful places cleaner than we found them.

A young couple visiting Florida from Germany came up to us to show us a photo of all the garbage they had collected. We discussed how easy it would be if they offered bags at the lifeguard stations, or if they posted a sign and asked people to pitch in – I bet many would. The beach is free and leaving it better than you found it would be a small price to pay. We laughed, shared a moment of connection, of sadness and of unity. Tourists cleaning the beach.

Today I am not asking you to be a litter ridder critter, although I think it’s a great idea, today I want you to reflect on the word implore.

A stranger influenced us, imagine who you could influence? What are you so passionate about that you would implore others to get on board or to join your cause?

Whether your medium is a blog post or a phone call, using your voice for the greater good, standing up for something you believe in may have more of an impact than you could ever imagine.

Using your power of influence for good, it’s just one more way to live Your Life, Unlimited!