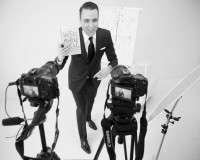 What can we learn from a young, driven, successful man?  Well quite a bit if we are open to it!  This conversation is not for the faint of heart as Stefan Aarnio author of Money People Deal shares his oft opinionated view of the world and the people in it.  Listen, if you dare,  to our CJOB radio podcast: Your Life, Unlimited with Stephanie Staples and Stefan Arnio.

For centuries, alchemists searched for the “Philosopher’s Stone”; a magical instrument that could turn lead into gold and they never found it. Every day fools buy lottery tickets hoping to turn “lead into gold”.

Explorers searched the globe for centuries looking for the “fountain of youth” only to never find it. Every day women in department stores spend millions of dollars to cling onto their fleeting youth.

Every night audiences in the hundreds of thousands stay up late into early morning watching infomercials promising “get rich quick schemes”, “get rock hard abs now” and dating programs that promise that the woman of your dreams is “one phone call away”.

We all want success to be easy.

We all want the silver bullet or the magic wand that will make things “easy” and change in an instant.

Success is never as easy as it looks!

What if we could increase our probability for success by focusing on one certain personality trait?

There have been hundreds of studies on success and scientists have found that it has nothing to do with intelligence, talent, luck, resources, contacts or education. However, studies have proven that there is a specific personality trait called “grit” that is directly correlated to success.

Grit is a psychological trait that indicates a person’s passion for a particular long-term goal. Grit is associated with perseverance, resilience, ambition, need for achievement and tenacity.

To make a long explanation short, the grittier a person is, the harder they will fight to succeed.

People with high levels of Grit are concerned with winning the marathon, not the sprint. They are long-term thinkers that aim to achieve long-term goals and are less concerned with short-term challenges and failures. A person with a high level of Grit will move from failure to failure and keep their eyes on the prize.

To quote Winston Churchill; “success is moving from failure to failure without losing enthusiasm”. Churchill understood Grit and he was able to capture the hearts and minds of the British people in World War 2. Throughout nearly the entire war, Britain was the underdog; suffering defeat after defeat from the Nazis. However, Churchill was able to inspire his people to become gritty, dig in and hold on. In the end, the Nazi war machine ran itself to destruction and the British were able to claim victory by sheer tenacity despite being the underdog for nearly the entire war.

Many of our parents/grandparents who were who were born in 1920’s became extremely gritty due to the fact that at age 10 they were in the great depression, by age 20 they were fighting in a world war. If they were strong enough to survive those two events, they came home, built themselves a house with their bare hands, raised four or more children and worked like a slave until they retired (or died).

3)    Hard work is required for success

Today’s young people are not conditioned to be gritty like their grandparents/great-grandparents. Today we live in a world of instant text messaging, facebook, twitter, video games, instant microwave dinners and soccer tournaments where the losers are taken out for ice cream.

Gritty people are able to delay gratification and often, this is the #1 key to success. Unfortunately, we are conditioned today to want instant gratification and many of us forget how tough our grandparents had to be to survive and thrive in the last 90 years.

If you are a success-minded individual, you should focus on becoming more “gritty”. To do so:

2)    Train yourself to not be discouraged by failure

4)    Become passionate about your cause

6)    Focus on winning the marathon, not the sprint

7)    Reward yourself for lasting power, do not become a flash in the pan.

Consider Aesop’s fable; The Tortoise and the Hare. The Hare is speed, he is flashy, he is loud and in the end he is the loser. The Tortoise is slow, persistent, consistent and gritty.
Be the Tortoise, not the Hare: the future belongs to you.

Thanks for reading and please lease share this article if you found it enjoyable!

Stephanie Staples, CSP* is the author of When Enlightening Strikes – Creating a Mindset for Uncommon Success and an internationally acclaimed motivational speaker. She empowers audiences & clients across North America to bring their ‘A’ game to work and to life. Stephanie has a special interest in working with and empowering nurses and healthcare providers. She happily calls Winnipeg, Manitoba, Canada home. You can get loads of complimentary resources to help with issues such as work/life balance, wellness, stress management and happiness in general, as well as find out more information about her coaching and speaking services at http://www.YourLifeUnlimited.ca. * Certified Speaking Professional (CSP), conferred by the National Speakers Association is the speaking profession’s international measure of professional platform proficiency. Less than 10 percent of speakers have earned this credential and are recognized as some of the best in their fields. Stephanie was one of only five professional speakers in Canada (and the only woman) to attain this designation in 2013.