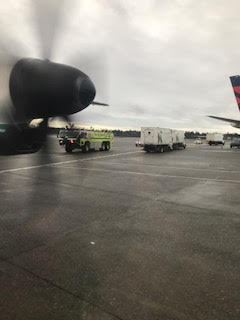 On the same day I ran across two very different people.

One told me she knows it’s been a great day if she loses track of how many times she has said thank you (either in her head or out loud). If it was too many to count at the end of the day, that’s her idea of an awesome and successful day.

I was walking off a plane and as I passed by the captain and the flight attendants and I said ‘thank you’ to them as I (and many people) usually do. I heard the woman in front of me do the same and as we were walking up the jet bridge she turned to her travelling partner and asked him if he said thank you. He replied, “No, why should I say thank you to someone for doing what they’re supposed to do?”

I have no words.

Well, that’s not true, I have a lot of words.

But all I’m going to say is I’d rather live my life like the first person, overflowing with gratitude, thanks, praise, compliments – even for people who are ‘doing what they are supposed to do.’

Especially if it means a safe landing. (This particular flight we had emergency crews standing by because ‘the flaps were stuck’).

May your day be filled with too many ‘thank you’s’ to count!