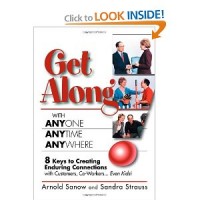 Either way, this weeks radio show will help you out, listen in as I speak with Arnold Sanow, MBA, CSP (Certified Speaking Professional). He  is the author of 6 books including, “Get Along with Anyone, Anytime, Anywhere.”  You can listen to the entire show as a podcast here: Your Life, Unlimited with Stephanie Staples and Arnold Sanow

(Based on the book, “Get Along with Anyone, Anytime, Anywhere” by Arnold Sanow – www.arnoldsanow.com )

Rate yourself on a scale of 1 to 5 on the statements below:

How often do you…

____ Listen to others attentively, even when you disagree?

____ Boost good feelings in others?

____ Express a positive attitude even when it’s difficult?

____ Give people credit for their ideas?

____ Treat others with respect even when you find it challenging to do so?

____ Honor differences of opinion and keep an open mind?

____ Act as a catalyst to help others get what they want?

____ Accept responsibility for a mistake you’ve contributed to or caused?

____ Adapt how you communicate in order to be most effective in relating to the needs of others?

____ Seek to understand how others see a situation?

____ Provide ample opportunity for people to air their grievances or concerns?

____ Give feedback tactfully and receive it willingly?

____ Work to find the best possible solutions for all parties involved when disputes arise?

____ Model the same behaviors you want others to express?

____ Seek to respond to what others want or need?

____ Master your emotions when angry or frustrated?

____ Create a sense of safety and openness?

____ Keep current as to what’s important and valued by others in every arena of your life?

____ Keep your commitments or promises?

____ Communicate respect in everything you say and do?

95-104:: Being responsive to others is music to their ears! Explore more ways to connect to what others want, need or value.

94 and under: Pump up your Get Along Power! You may find yourself often frustrated from misunderstandings, disappointments and missed connection opportunities.

Again, the podcast of the show is here – commercial free here: Your Life, Unlimited with Stephanie Staples and Arnold Sanow

Stephanie Staples, CSP* is the author of When Enlightening Strikes – Creating a Mindset for Uncommon Success and an internationally acclaimed motivational speaker. She empowers audiences & clients across North America to bring their ‘A’ game to work and to life. Stephanie has a special interest in working with and empowering nurses and healthcare providers. She happily calls Winnipeg, Manitoba, Canada home.  You can get loads of complimentary resources to help with issues such as work/life balance, wellness, stress management and happiness in general, as well as find out more information about her coaching and speaking services at http://www.YourLifeUnlimited.ca.

* Certified Speaking Professional (CSP), conferred by the National Speakers Association is the speaking profession’s international measure of professional platform proficiency. Less than 10 percent of speakers have earned this credential and are recognized as some of the best in their fields. Stephanie was one of only five professional speakers in  Canada (and the only woman) to attain this designation in 2013.