I think of people, specific people and specific acts that they have done.

I think of my teammate Louise. She is retiring from ringette after decades of coaching and playing the game. I don’t know what has made her decide to hang up her skates; I guess it’s just her time. As I look back and reflect upon the time I shared with her on the ice that classy word comes to mind. Louise is a class act.

In all the years I played with her, I never heard a derogatory comment about another player. She was/is a great player herself but never hogged the ice, never went for glory and put the team before herself. She always seemed to want to help others shine. She was quietly understated, assumed the best of others and didn’t take things personally.

I remember vividly early in my ringette ‘career’ during the playoffs… the game was tied and it was the last two minutes of play. It was my turn to go out but I was new and not very good and I didn’t want to go. I stepped aside so that she could go ahead of me and very likely score a goal that would lead us into the next game of the tournament. But she would not go. In the seconds that we had to decide, as I tried to explain that I didn’t want to go, didn’t need to go – I needed her to go, she would not.

“It’s your turn, now go!” she said in the type of voice you don’t argue with. I don’t even remember if we won or not, I just remember thinking wow, that is a classy lady.

I think of Bill. I had a business meeting in Edmonton with a Police Officer. We had met before at an event I was speaking at and he wanted to talk about partnering to do some work with law enforcement. We had talked on the phone numerous times before my visit, so I felt like I knew him a bit. We had a really productive meeting and then we parted, I leaned in to give him a hug. If you know me at all I’m super huggie and this is a very normal thing for me to do.

And then he said, “Out of respect for my wife, I can’t hug you again.” Oh wow, that had never happened before. I almost felt embarrassed but then changed my mind. I’m not going to be embarrassed for who I am. I know my intent was innocent and so did he. He was just setting very clear boundaries so that we could work together in the future; out of respect for his wife. Now that’s classy.

I think of Michel, my friend who was visiting from out of town; my friend who I lent my car to one extremely cold winter night; my friend who was going to pick me up from a downtown event at midnight but didn’t show up. It was dark and freezing; I was cold and alone and scared. Everyone else had left. When he finally got to me, I was so mad. Possibly as mad as I had ever been and I let him know. It wasn’t until days later I realized that I had given him the wrong street number and he was waiting for me in the wrong place. His phone had died so we couldn’t connect. When I realized what I had done I called him to apologize and tell him what I had realized.

Wow. He didn’t defend himself. He didn’t get mad at me back. He let me vent. He knew I was cold and scared and alone and he felt bad, even though it was my own fault. Now that’s classy.

I don’t know when or if I have been classy to someone else in my world, but I sure do know that I can recognize the amazing quality in others and I will make certain I verbalize how I appreciate them going forward. I hope you do too.

Meanwhile, Louise, Bill and Michel you are three class acts!

That’s me and Michel grinning big below! 🙂 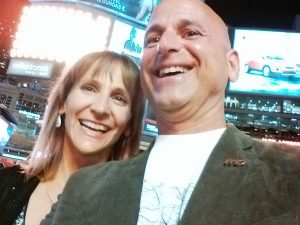