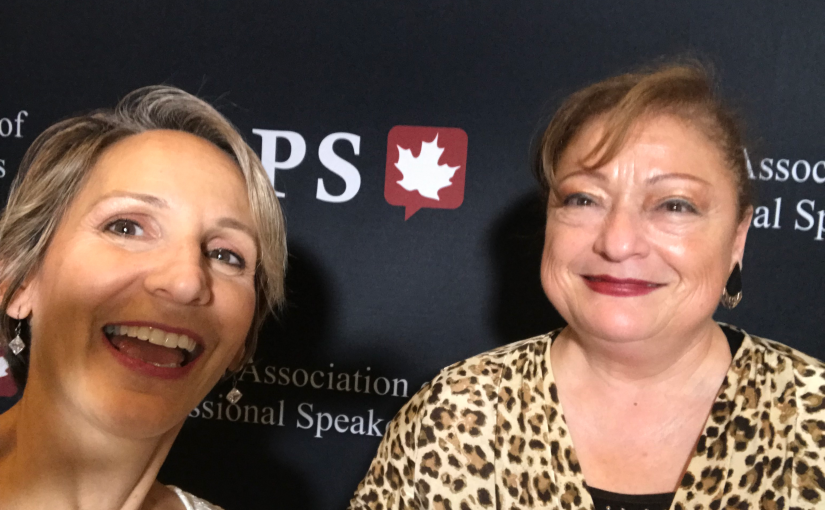 It’s always a beautiful end to my year, the annual conference for my professional speaking association (CAPS). This year I was not on stage and I did not have a big volunteer role, mostly I was there to learn, share, grow and belong – the four words that encapsulate our organization. I love CAPS and owe everything I know about the speaking business to the people here. I hope you have an even like that for your profession!

Do you ever find when you go to events and conferences the learning that comes from the main stage and the breakouts are just part of the package? I find oftentimes some of the real gems and takeaways come from our colleagues and random encounters. And so it was for me this year as speaker buddy and newly minted PhD, Paul Frazer made the last hours of convention an unforgettable, huge learning experience for me.

On the last night of the conference, we have a banquet and Paul and I often share a table. We live at opposite ends of the country and so this is a wonderful time to catch up. We invite 8 other people, people who we also don’t get to see often so it’s a special time.

Since The Hub decided not to come this year, we ended up with an extra seat at the table and I thought about maybe inviting one of the first time attendees, then we could get to know them better and they might feel more included. Paul upped my good idea and suggested we invite someone from the hotel staff who had given exceptional service. Wow, isn’t that an idea!

The words weren’t even out of his mouth when I said if he didn’t have someone specific in mind, I did!

It was Patricia (aka ‘Ay Caramba’, as she was affectionately called) she had been my delightful server on the first day of the event and we were chatting so much that she almost sat down with us as we ate our soup! Immediately I went into the restaurant to invite her.

What would you have done if some crazy stranger invited you to a fancy banquet the next day? Would you ask some questions? Would you take some time to think about it? Even I would have, but not Ay Caramba, she immediately said yes and gave me a big hug! OK then, we have a date!

The next day, I went to confirm with her, I wanted to make certain if we were buying her a ticket that she was actually coming and sure enough, she had her fancy clothes packed to change into after work and she was so excited, grateful and appreciative!

That night Ay Caramba, this shining star from El Salvador, this 30 year employee who said never in her 30 years has she been acknowledged for her work at the hotel, was the belle of the ball. She chatted with everyone at the table (who all thought she was a fellow professional speaker of course!), she clapped for all the people she didn’t know who were winning awards, she danced her little heart out, and she hugged – oh how she hugged! I can’t remember last when I saw someone so grateful.

It was so funny when our servers (her long-time friends and colleagues) served her and didn’t even recognize her and then after dinner, we had to stop her from collecting the dishes!

She stayed at the banquet until in a Cinderella-esque moment, her parking was about to expire and she had to dash away. Ay Caramba was magical and it was the highlight of my convention to have her there.

Now back to Paul.

Somehow, earlier in the evening things got mixed up as the organizers assigned an extra person to our table. With absolutely no way to fit in an extra body at the table, Paul had quietly found himself somewhere else to sit by the time I arrived. Without fanfare, drama, or making anyone feel bad or awkward he just settled into his new place and allowed the table that he had helped organize enjoy themselves. Not only that, but Paul would not take any money for Ay Caramba’s banquet ticket. I believe it was a night she will never forget and it was a night that would never have happened for her without Paul’s classy idea and generosity. Actually, it was a night I will never forget either. Classy people rock!

This week notice someone who may otherwise feel invisible, the people who have jobs that don’t get accolades, the ones who are behind the scenes, the ones who quietly and without fanfare take care of us, keep things clean for us, make things happen and/or allow us to enjoy life, be more comfortable or do great work. Then consider doing something classy!

Acknowledging a person who might feel ‘invisible’, it’s classy and it’s just one more way to live Your Life, Unlimited!

PS – If you want to pay it forward, Paul is doing a research project on motivation, if you would consider helping him out it would take about 15 minutes of your time and it would be so appreciated. www.motivesatwork.com